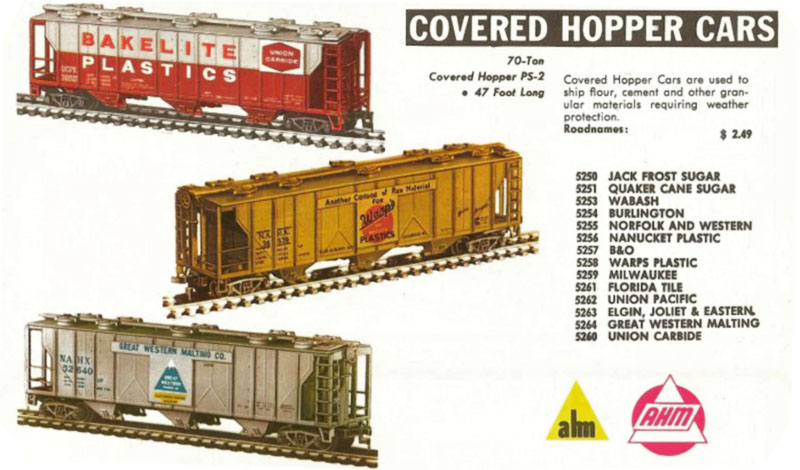 ABOVE: This is the entry in AHM’s late 1960s catalog for the first group of 47-foot Covered Hopper models.

This AHM HO-scale freight car model is based on a Pullman-Standard design for a 70-ton 47-foot Covered Hopper with 3,215 cubic foot capacity. This makes AHM’s model a slightly larger car than contemporary Athearn and Walthers 2,893 cubic foot versions offered in HO scale.

Following this car’s departure from the AHM line, a kit version surfaced from another maker. The January 1985 Model Railroader includes a review of the then-new Robin’s Rails PS-2 Covered Hopper. The review states that the Robin’s Rails kit used tooling from the former AHM model. Similar molds for this PS-2 car are later found among the Con-Cor line of trains around 1990. The Con-Cor models were made in America and include this noted on the origin marks down the car’s underframe. Con-Cor’s revision to the tooling provided coupler pockets on the ends and dropped the original truck-mounted X2F coupler design.