AHM’s EMD SD40 model featured a dual-flywheel mechanism and 8-wheel drive. The Yugoslavian-made model featured a similar design to those found on other Mehano toolings. The SD40 nose, cab, and long hood are one-piece plastic and the frame, pilots and handrails are another one piece plastic section. This design style does provide the model with tread pattern on its walkways, not a usual feature of models of that time. Original 1979 road names included in the first production provided Burlington Northern, Chicago & North Western, Conrail, Southern Pacific, and Western Maryland, as well as an undecorated SD40.

Model Power and IHC-Hobby offered a similar SD40 diesel models and you will also find variations in Mehano packaging. Later examples feature a revised tooling with open pilots on each end to allow for the swing of a truck-mounted coupler. This is not known to be a spotting feature of AHM SD40 examples. 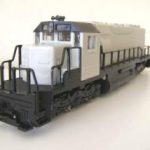 What would at first appear to be an AHM Pennsylvania SD40, however the model is a custom run offered at one time by Bev-Bel. The Bev-Bel line offered many exclusive road name offerings on models produced by other companies, notably Athearn and Life-Like. Bev-Bel’s is no longer in business. The custom SD40 release from Bev-Bel dates to 1983 and included: Baltimore & Ohio (#4153), Central of New Jersey (#4151), Pennsylvania Railroad (#4150), and Western Maryland (#4152). Differing from AHM’s circus scheme Western Maryland SD40, Bev-Bel’s model was black with yellow lettering.