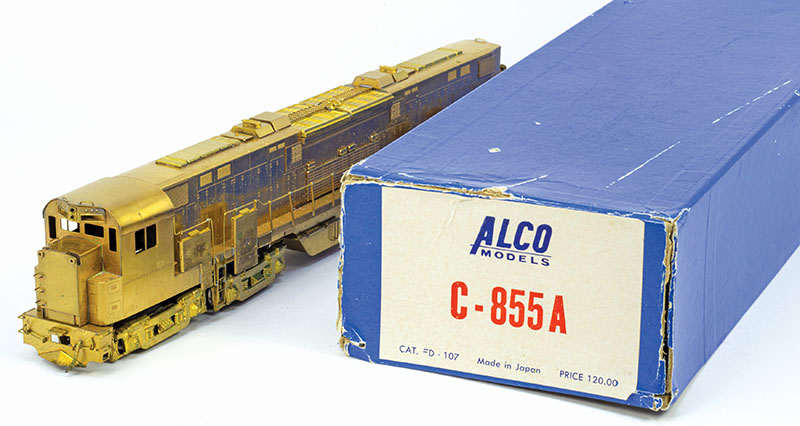 This mighty brass replica of Alco’s C-855A was Alco Models’ catalog number D-107 and originally listed for $120 as this box shows. 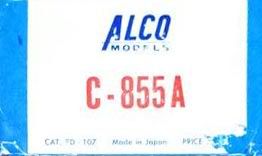 One of the biggest releases from Alco Models was its Japanese-made Century 855 or C-855 diesel locomotive HO-scale brass replicas. The hand-built brass reproductions saw release in North America by Alco Models in 1971… a bit less than a decade after the prototypes went into service in the 1960s.

According to Brass Model Trains Price & Data Guide: Volume 2, 2009 Edition (2009, Publishing Partners International), this Alco C-855 has been the subject of several brass importers over the years. Among the companies to import HO-scale brass models (no plastic efforts have to date been produced), Alco Models was first with its Kumata-made C-855A (D-107) and C-855B (D-105) replicas in 1971. As was typical for this era, the imports came undecorated with the A-unit retailing for $120 and the B-unit listed for $175.

ABOVE: From the early 1970s, Alco Models imported this C-855A from Kumata of Japan. This example shows some foam deterioration damage on the truck sideframes and tarnish on the sand storage areas along the handrails.

The C-855A sample examined included a separately bagged incandescent bulb with wires and a plastic sprue with milky white number board panels. The prototype was 85-feet in length (the longest production diesel until 1969’s DDA40X) and the model follows the real unit with good detail and accurate proportions.

ABOVE: Alco built only one C-855B, while Alco Models imported a reported 300 examples (half of what was brought in for C-855A units) in this release.

The next time these giants saw HO release in brass was in the early 1980s by Samhongsa for Oriental Limited. For this release, reference information shows unpainted and factory decorated C-855A replicas were imported, along with unpainted C-855Bs. Overland Models imported C-855A and C-855B units from Ajin (with some percentage of the C-855A run receiving Union Pacific decoration by Overland Models’ custom painters).

ABOVE: Union Pacific 60 at Grand Island, Neb., in April 1968. You are looking at half of Alco’s C-855A production. – Kevin EuDaly collection

Union Pacific (UP) was the only railroad to purchase this massive Alco double-diesel offering. This 5,500-horsepower Century-series model, and it’s C-855B companion, takes credit as the most powerful Alco diesel locomotive ever constructed. Alco built a pair of C-855A (DL-855) units and a single C-855B (DL-856) that all went to work for Union Pacific in 1964.

ABOVE: Alco Models is not known to have offered its C-855 releases in decorated versions. This example shows a custom painted C-855A carrying UP 60. The C-855B was 60B, while the other C-855A carried UP 61 for its road number. 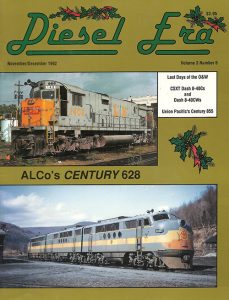 You’ll find this interesting prototype covered in Diesel Era‘s 1996 (Volume 3, Number 6) issue. The article by Diesel Era‘s staff includes drawings of Alco’s C-855A and C-855B units with a table of data presenting the unit’s specifications. You’ll find history on the double-diesel projects undertaken in the early 1960s by not only Alco, but also Electro-Motive Division (DD35) and General Electric (U50). The article notes Alco was early in announcing its 5,500-hp C-855 model, but beating to the rails by EMD and GE efforts in 1963 and 1964.

Alco’s three C-855 set (A-B-A) provided Union Pacific’s requested 15,000 horsepower for priority freight service on its Overland Route (and even included 1,500 hp above the goal). This need for 15,000 horsepower to move freights on time over the system was an impetus for the run at double diesels. Alco was least successful with its attempt (putting what amounted to a pair of C-628s on a single platform) versus EMD and GE. Alco’s competitors saw additional orders not only from Union Pacific, but also Southern Pacific joining UP for cabless DD35s and U50s. EMD’s DD35 was designed for use with two GP35s to create an A-B-A lashup to achieve the desired horsepower and not only did UP buy more, the DD35A with cab and later DDA40X saw construction by EMD and sales to Union Pacific by the close of the 1960s. As the 1970s got underway, the service careers of UP’s C-855As and single C-855B was over.