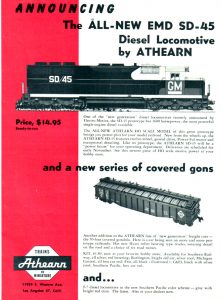 Model Railroader’s May 1966 Trade Topics column reviews the new Athearn SD45. The review states, “this model was produced before the prototype had itself been completed, but you will have to look hard to find any differences.” The flaired radiator grille are sectioned into two on the Athearn model, while the EMD production SD45 included three sections. Model Railroader inlcudes a picture of the Burlington and Union Pacific SD45 models, though they appear to perhaps be handpainted pre-production examples.

EMD would build 1,260 SD45 diesels from 1965-1971. During this production the SD45 would see changes or phases in its appearance. Athearn places a crank-type handbrake on the nose of its SD45, which would place this example in the early phase of production. This would make sense, as the Athearn model is released at the beginning of EMD’s SD45 production and later examples would not have been present for Athearn to use in its design.

The Athearn Burlington SD45 of 1966 was foretelling the future, the CB&Q would be an owner of EMD’s SD45 in 1969. However Chinese red paint was never applied, the SD45 arrive in a pre-BN merger hockey-stick green, white and black scheme. The Q SD45s did naturally include the nose light that both Athearn and Burlington were fond of using, however the green Burlington SD45s would have a brakewheel located on the end of the long hood of the engineer’s side of the unit and not in the nose as Athearn did.

Athearn did a very striking metallic blue and white with silver trucks EMD Demonstrator SD45. The Demo has an accurate roadnumber and generally right details for this early example.

The Pennsylvania SD45 from Athearn carries a roadnumber that doesn’t match up to a prototype. Pennsy’s SD45’s are numbered in the 6100-6200 series and are among the last diesels delivered prior to the Penn Central’s birth in 1968.

The Seaboard 1100-series numbering chosen for the Athearn SD45 would place it after the SAL’s SDP35’s delivered in 1964. Seaboard is among the roads that bought the lower placed dual headlights that Athearn included on its EMD models, but there are no SAL SD45s on its roster. The Seaboard Air Line joins Atlantic Coast Line in creating the SCL -Seaboard Coast Line in 1967. The Atlantic Coast Line brings a few SD45 diesels to the new SCL in ’67 and the new road would buy more between 1968 and 1971.

The Southern Pacific was the major buyer of EMD’s SD45. The original 1966 Athearn SD45 wears roadnumber 8803, which would put it in the Espee’s first order of 30 SD45s. The SP was a fan of interesting headlights, but they did not subscribe to Athearn’s standard of the dual headlight placed just below the roof of the nose.

Athearn’s 1966 issue SD45 for the Union Pacific carried roadnumber 806. and the road’s “Dependable Transportation” slogan on the cab. The UP SD45 roster included 50 examples delivered in the spring of 1968 numbered 3600-3649. 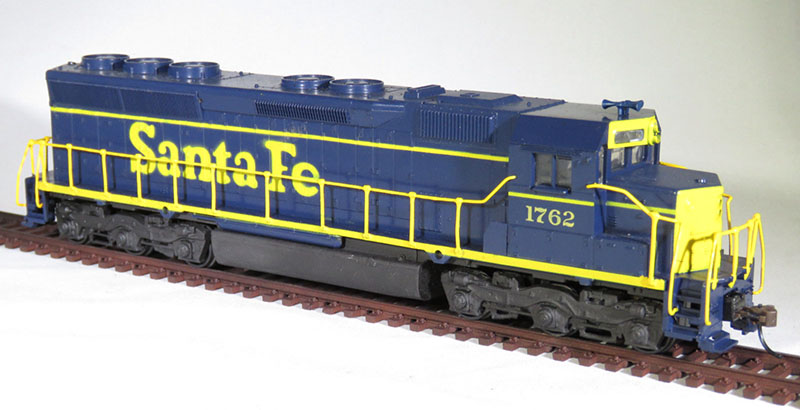