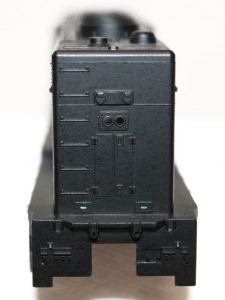 Built from May 1966 thru May 1970, EMD constructed a total of 20 examples of its SDP40. Original owners of this boiler equipped six-axle 3,000-hp diesel included only Great Northern in the U.S. and Mexico’s N de M. One might question why a hobby company would bother investing time and finances to tool up such a limited use prototype. Had Athearn tooled the straight EMD SD40, rather than the SDP40, it would have had a big sales winner no doubt. It should be remembered, the Athearn model hits 1:87th rails the same time the first of the 1:1 prototypes were delivered and the success of this diesel would not have been known. Athearn did include Great Northern among the offerings for its SDP40, but did not do the other prototype road N de M. The SDP40 was decorated in “Big Sky Blue,” the prototype was delivered in the simplified “Empire Builder” green-and-orange and repainted in Big Sky Blue.

A with most EMD offerings from 1957 thru 1975, this example was produced with a wider than accurate hood and nose to house the drive motor. Athearn has retired the SDP40, as it has done with its wider than scale hooded locos.