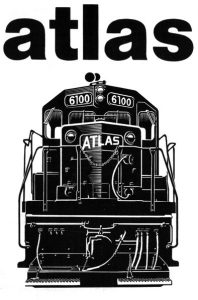 Founded as Atlas Tool Co. by Stephan Schaffan, Sr., in the garage of his home in Newark, N.J., in 1924, it was his son Stephan Jr. who would expand the family company into the hobby world a decade later. The first manufacturing facility was opened in nearby Hillside, N.J., in 1947, and soon Atlas was making pre-fabricated track products for model railroaders full-time.

While track and structures had been part of the catalog for many years, it wasn’t until 1975 that Atlas began producing its own line of HO scale diesel locomotives. The first models were manufactured by Roco and imported from Austria. A partnership was formed with Kato of Japan to produce a line of fine-scale ready-to-run plastic diesel models, among the first made available to the American market.

This web site is in no way affiliated with Atlas Model Railroad Co., Inc.