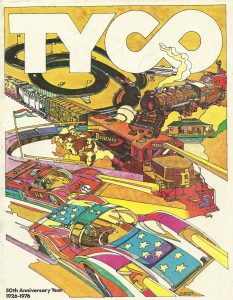 TYCO’s 1976 product catalog celebrated the company’s 50th anniversary (technically Mantua dates to 1926, TYCO’s name appeared in the early 1950s). New for 1976 was the return of a Baldwin “Shark Nose” RF-16 diesel locomotive model. Introduced when the prototype was current on U.S. rails, for its mid-1970s return an injection-molded plastic shell was made versus the original’s die-cast metal tooling. The drive was also switched to TYCO’s contemporary PowerTorque system.

Among the offerings, TYCO included a fantasy road that may have taken inspiration from a real train name or popular song title: Midnight Special. The livery was borrowed from Wabash’s early diesel scheme and looked very striking on this pointed-nose diesel, though Wabash never owned any Baldwin Sharks.

For its second year in the line, TYCO revises its Midnight Special by dropping the tank car from the consist. The 1977 edition (TYCO’s 7304 stock number) featured a yellow Union Pacific hopper and green 50-foot Burlington Northern boxcar with the Shark Nose and streamline-cupola caboose returning in Midnight Special dress. The set is essentially the same for 1978, though the move to Tru-Steel track sections appears to bring with it a new stock number of 7305. The set makes a final appearance in TYCO’s 1979 catalog and retains the 7305 stock number, though the matching blue and white Midnight Special caboose is absent in the illustration. TYCO’s generic red with white stripe caboose appears at the end of the train and in the image for the set box contents.