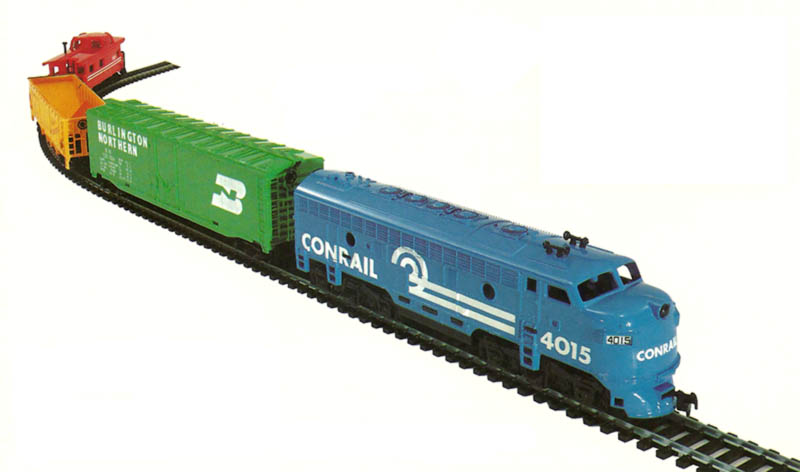 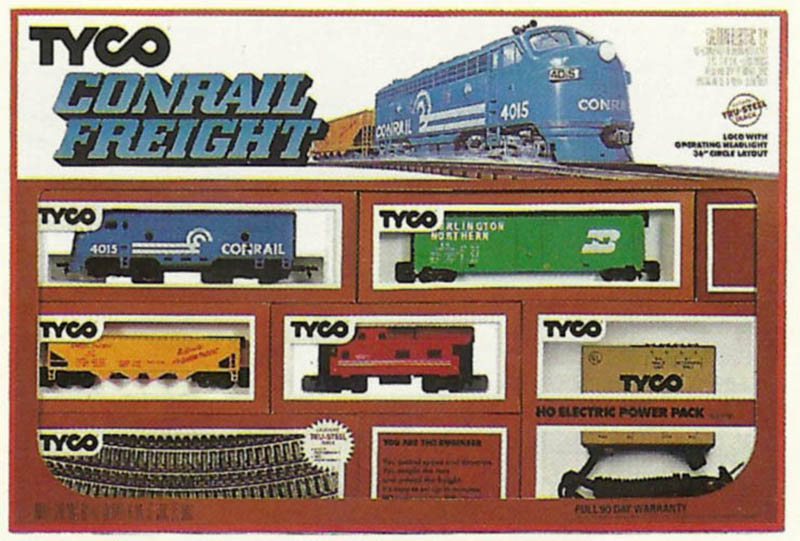 One of TYCO’s basic HO-scale train set offerings that opened the 1980 product catalog was The Conrail Freight (No. 7303). The set included a circle of Tru-Steel track, power pack, a Conrail F9A diesel locomotive, 50-foot Burlington Northern boxcar, Union Pacific hopper, and red caboose with white stripes. No known Conrail caboose was produced by TYCO, which explains the generic caboose. Collectors could find a near duplicate of TYCO’s streamline cupola caboose decorated for Conrail. In the early 1980s, AHM offered a run of the caboose tooling that sold first from Pemco and AHM included a blue Conrail example with white lettering that would be right at home with this TYCO train set. The Conrail Freight train set made a second appearance in TYCO’s 1981 catalog.

The blue Conrail F9A (No. 224-20) was listed among separate sale diesel locomotives beginning in 1977. You could also find a matching pair (including same road number 4015) of Conrail F9As (No. 248-20) as powered and dummy set from 1977 through 1979. Compare the Conrail F9A, actually an F7A though marketed by TYCO always as an F9A, pictured at the top of the page with the train set to the pair of Conrail F9As from a late 1970s catalog appearance. The model in the 1980 train set is TYCO’s later tooling F-unit with Farr-type grilles on the sides of the unit and the separate white plastic with black “4015” numerals number boards. The Conrail pair represent TYCO’s earlier F-unit tooling.