Dating back to the introduction of the real EMD GP20s in the early 1960s, this model was with TYCO throughout the company’s HO-scale train line’s entire life. Originally offered with Mantua’s powered-truck drive, it later received the TYCO PowerTorque drive truck. Like the F-units with this feature, collectors can spot the difference between the two by the larger and longer size of the PowerTorque truck over the original Mantua’s Blomberg truck that is somewhat more correctly scaled.

The majority of TYCO’s GP20 offerings carry the number 5628. This was one of the numbers given to EMD’s demo set of GP20s. TYCO follows this same-number pattern again on the Century 430, most all are number 4301, and also on the Super 630, which are mostly all numbered 1102. One might guess this was done to make a one-does-all numberboard that was cast a number that was then supplied to all locos of a certain body style.

The GP20 does have at least one odd offering or possibly non-offering. The Santa Fe blue-and-yellow freight warbonnet scheme is found only in the 1976 catalog. To date, there has been no confirmation that it was ever a regular production item and may not exist.

The GP20 was offered by Mantua throughout the company’s second life beginning in 1978, when the Tyler family brought the Mantua name back with mostly steam engine offerings. Mantua sold its line to Model Power after exiting the HO-scale train market in 2000. To date, Model Power has not offered the GP20 and it is not known if Model Power purchased a set of molds for this diesel, when they took control of the Mantua products.  Additionally, it has been reported that IHC Hobby has the TYCO GP20 mold in its collection and could therefore issue it in the future.

TYCO produced at least three Burlington Northern GP20 offerings during the 1970s. Sharing the same incorrectly placed lettering found on the similarly uncataloged Alco 430 and F9A models in Burlington Northern paint is this GP20. The BN logo and name prototypically appear below the cab windows, rather than down the long hood. TYCO made another very common and equally inaccurate, but this time cataloged attempt at a BN GP20 beginning in 1979.

A Red Box example of a Burlington Northern GP20 is known to exist. It carries the same 228N stock number. The Red Box BN GP20 example had its BN logo and the railroad’s name placed under the cab window, rather than down the long hood. The Red Box model also features a small white 5628 number low on the long hood near the rear end below the radiator grilles.

TYCO produced at least three different examples of a Burlington Northern GP20 over the years. The first is late Red Box Era example that is similar to the second variation shown on this page. The BN example found directly above with the large BN herald is TYCO’s most common of the three attempts. This Burlington Northern GP20 first appears in the 1979 catalog and continues to appear through the 1992 catalog. 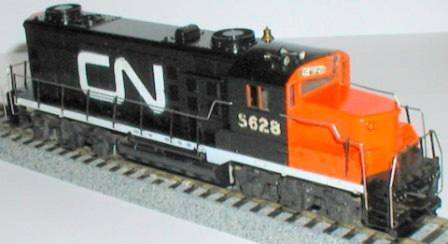 First introduced in the 1966 TYCO line was this Canadian National GP20. A holdover from the 1960s Red Box Era offerings, the Canadian National GP20 example has been found in TYCO Brown Boxes in addition the earlier Red Box models. TYCO did apparently apply more than the pictured 5628 roadnumber to this model for its CN service. It may also have served as a Canada-only item sometime during its TYCO run.

In bright orange and yellow colors, TYCO’s Chattanooga GP20 is a colorful contrast to the black steam engine offerings that also carried the Chattanooga name. TYCO includes this model in a pair of catalogs, 1977 and 1978, while the Chattanooga steamers make in the line to the early 1990s. For further information regarding TYCO’s Chattanooga Choo-Choo trains, see the page on this site devoted to this popular series. 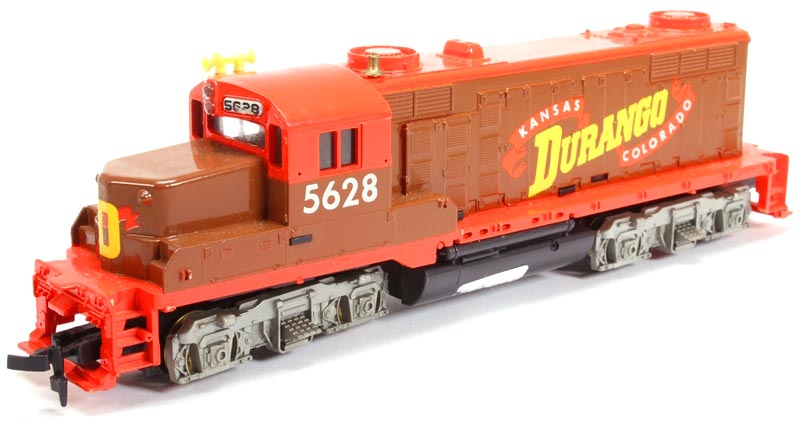 An Illinois Central example is the found in TYCO’s first catalog to include the GP20. That original IC geep is in the road’s black scheme with the Green Diamond herald and was apparently never produced beyond the catalog’s pre-production model. TYCO did issue an Illinois Central example of the GP20 in the late 1960s. That example features a scheme similar to what’s seen above, but with red and silver replacing the prototypical IC orange and white. During the early 1970s, TYCO offers this Illinois Central GP20. This model avoids getting its picture in a TYCO catalog.

The image directly above of the Illinois Central Gulf GP20 is the typical TYCO production run example carrying the 5628 road number. Regular run examples reviewed do not match the lettering size and style, nor the cab number 9061 seen in TYCO’s 1974-75 catalog. This ICG model receives only one appearance in a TYCO catalog in the 1974-75 edition. The black circle ICG herald on the unit’s nose is a sticker.

There are at least two variations to this Penn Central GP20 offering. One GP20 features a red-and-white PC herald on a light green colored model; the other has all white lettering and the unit’s base color is a deeper green. Both models carry the typical GP-20 roadnumber of 5628. Neither example made into a TYCO catalog during the Brown Box Era, however availability is guessed to be from late Red Box Era of the 1960s through the early/mid 1970s. 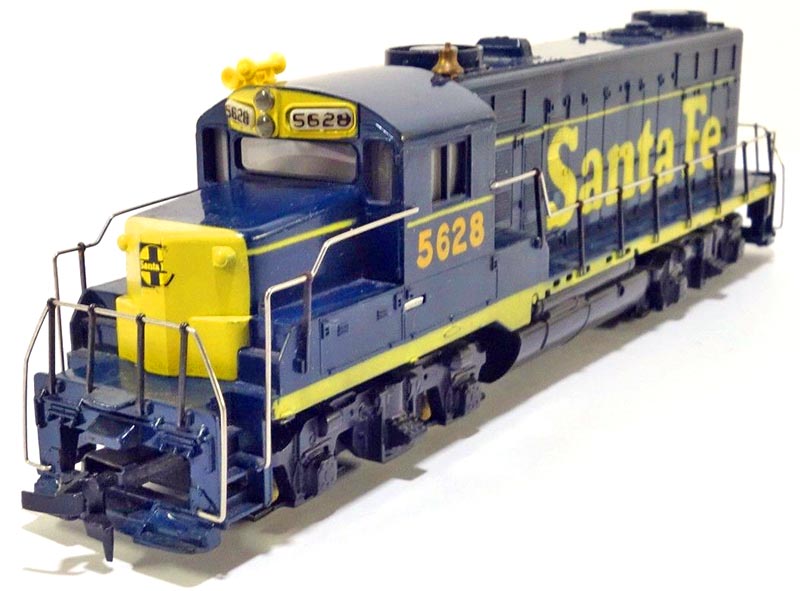 Certainly a classic and common example among TYCO’s GP-20’s is the Santa Fe wearing the road’s blue and yellow freight scheme. First offered during the Red Box Era, this example survives in TYCO catalogs through the 1975-76 edition. The 1975-76 catalog marks the switch from letters to two-digit numbers to designate a model’s roadname.

TYCO’s 1975-76 catalog marks the switch from letters to two-digit numbers to designate a model’s roadname. A Santa Fe GP-20 with blue and yellow freight warbonnet scheme is found in the 1975-76 catalog. To date, no examples have surfaced and this model is thought to exist only as a mock up done for the catalog illustration. By the 1978 catalog, TYCO offers the red and silver warbonnet Santa Fe geep through the conclusion of HO-scale train offerings in 1993. 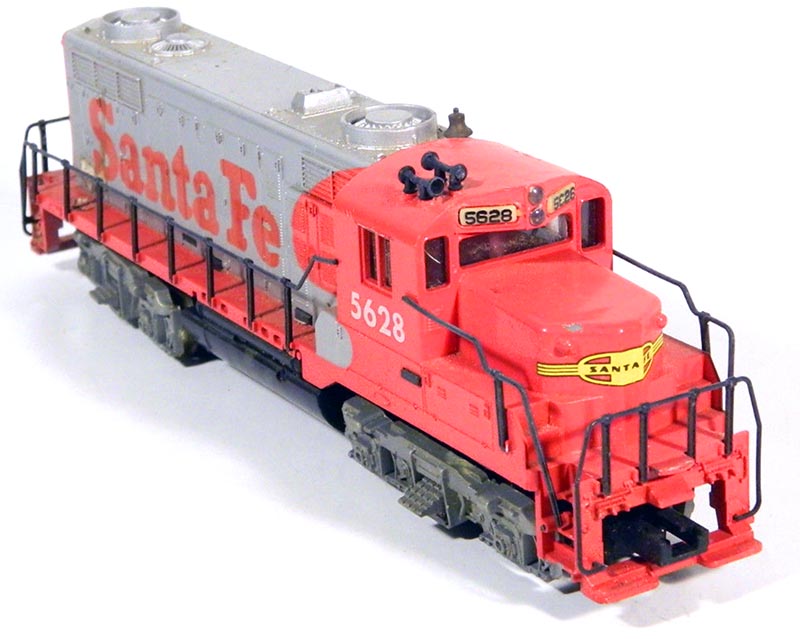 Introduced in TYCO’s 1978 catalog is the red and silver warbonnet Santa Fe GP-20. This version of a TYCO Santa Fe GP-20 would be the last from TYCO and survived in the line with catalog appearances through the 1993 catalog, that was the final one to include HO-scale model trains. This Santa Fe GP-20 features a variety of handrail configurations. Initial offerings would have included the metal railings and separate stanchions applied by the user. Not long after this geep’s 1978 introduction, TYCO switches handrails to single plastic cast pieces. Still other examples from the end of TYCO’s HO-scale train releases include no handrails.

Going by TYCO’s catalog pictures, there could exist three different examples for the Union Pacific GP-20 model. Near the top of this page, you’ll find the Union Pacific example as found in the 1974-75 catalog sitting with classmates CB&Q; and ICG. Notice that that example features a large 5628 cab number and repeats the 5628 number again beneath the Union Pacific name on the unit’s long hood. Above examples include a UP GP-20 carrying the company’s “Dependable Transportation” slogan on its cab and the 5628 in a low position also on the cab. This example lacks the roadnumber on its long hood. The “Dependable Transportation” UP GP-20 is found in the 1970-71 TYCO catalog. Finally, below the “Dependable Transportation” example is what is found in the 1975-76 product catalog. This UP GP-20 features only the 5628 number on its cab and the Union Pacific name down its long hood. The Union Pacific GP-20 first appears during TYCO’s Red Box Era ’60s offerings carrying the stock number 228C, switching to 228-23 in 1975 as TYCO alters is numbering system. The 1975-76 TYCO catalog is the last one to feature this example of the GP-20. 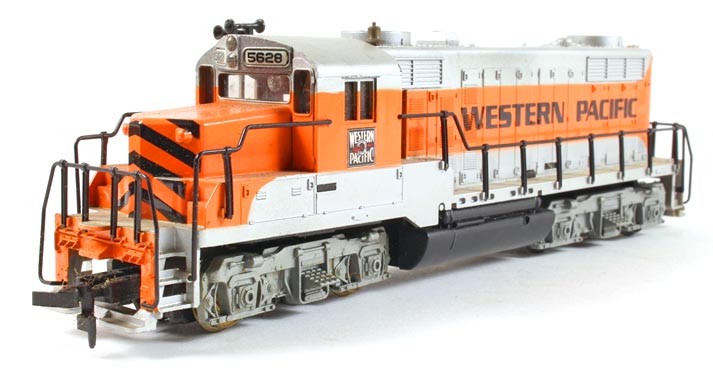 Enjoying a single year in TYCO’s 1979 catalog is this well done Western Pacific GP-20. A Western Pacific Caboose to match this GP-20 made it to at least the pre-production level.