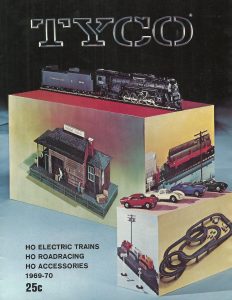 One of the most common freight cars produced in HO scale was this four-bay offset-side open hopper model. TYCO’s tooling is thought to be derived possibly from the late 1950s Athearn effort or is at least very similar. You’ll find that many companies reproduced this prototype and one could fill a collection with nothing but examples of this four-bay hopper car model.

The first appearance for this 40-foot hopper car model was in TYCO’s 1969 catalog. To my knowledge this model is just late enough that there are no kit versions offered for it and only ready-to-run examples were produced. That first appearance in 1969 included a blue Boston & Maine example in TYCO’s catalog. In train set illustrations, you’ll find two of these hopper cars in 1969: TYCO’s silver Virginian and the mentioned Boston & Maine. The model carried a $2.50 suggested retail price for its first year in TYCO’s line. As there is no specific list in 1969, I can’t confirm how many road names were included in TYCO’s initial production of this model. In the 1970-71 catalog, you’ll find a red Chicago, Burlington & Quincy and black Reading additions to the collection. These two road names, along with the previously shown Boston & Maine and Virginian hoppers appear in train set illustrations. TYCO shows its silver Virginian hopper among separate sale freight cars in 1970-71. A 1973 TYCO price list shows four road names (Boston & Maine, Burlington, Reading, and Virginian). The hopper car’s list is shown as $2.00 in TYCO’s 1974-75 catalog. TYCO’s 1975-76 catalog adds the yellow Union Pacific model; it is shown among separate sale freight car releases and makes appearances in several train sets. In 1976’s catalog the retail moves to $2.20 for this hopper car and Union Pacific and Virginian models are present in separate sale images.

For 1977’s catalog, TYCO introduces four “Billboard Hopper” offerings: Bethlehem, Blue Coal, Purina, and Revere. These releases retailed for $2.50 each, while the two standard hopper car offerings (Union Pacific and Virginian) show a $2.00 retail. Unlike the standard hopper cars which appeared as TYCO’s 344-series, the Billboard group were in the 366-series of stock numbers. In the 1980 catalog, the only Billboard release remaining is the Blue Coal offering. There are no Billboard Hoppers present in 1981.

In 1979, TYCO adds a green Burlington Northern release to its 344-series hopper cars. A blue Conrail hopper follows in 1980. By the mid-1980s, TYCO shows Conrail and Union Pacific hopper cars in train sets and among individually available rolling stock releases. TYCO’s blue Conrail offering is the surviving road name among separate sale freight cars for this hopper model into the 1990s. The final appearance for this hopper car model is a yellow Union Pacific example included in TYCO’s “Overnight Freight” train set in 1993.

As with many things TYCO, there are variations to some road name decorations over the years of production. The tooling or a very similar copy of TYCO’s own less-than-original tooling made a comeback in IHC-Hobby’s line.