TYCO’s G.I. Joe Electric Train & Battle Set (No. 7418) made its debut in the company’s 1983 product catalog and received exposure on the cover of that year’s publication. This is an important set for TYCO historians, as it marked the first of the electric train manufacturer’s line of licensed characters from television shows and movies for the 1980s. The last time TYCO offered such licensed sets was back in the mid-1960s. It is also a somewhat sad point in TYCO history for those with a passion for the company’s model railroad line, as this set was the first of a number of non-railroad name decorated offerings that marked the beginning of the slow retreat from HO-scale electric trains for the long-time hobby company. A decade after TYCO introduced its G.I. Joe set, you would see the last appearance for HO trains in the company’s 1993 product catalog.

The G.I. Joe product line was more than well-established and recognized by the time this 1983 TYCO release appeared. The Hasbro-licensed train set is thought to have been done to support an animated American television series launched in 1983, “G.I. Joe: A Real American Hero.” 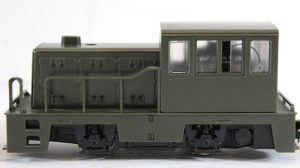 The set provided a 50-foot flatcar, 40-foot single-done tank car, 40-foot gondola, and the company’s signature streamline-cupola caboose. When looking for examples of this set, untouched models will be plain green, except for the 40-foot gondola. That model appears with white “SPECIAL FORCES” pad-printed lettering. Rolling stock is standard TYCO tooling and you’ll find the company’s name and Hong Kong origin markings on the underframes of the models. Decoration for the train models, as well as provided tanks, jeeps, helicopter, and boat came from a sheet of G.I. Joe stickers TYCO included with this set. Given its three-year run in TYCO catalogs and likely large production run, it is a bit surprising that models did not receive G.I. Joe markings from the factory. TYCO provided plastic soldiers, four tanks, two jeeps, a helicopter, assault boat, and four parachutes with this G.I. Joe set. Those items were split up into green and blue groups to represent G.I. Joe’s strike force (green) and the Cobra Command enemy army (blue). The 4-1/2 x 3-1/2 foot G.I. Joe “Battleground Play Mat” was similar to the TYCOSCENE layout boards introduced in 1982. The mats provided with the G.I. Joe set and other 1980s sets of similar oval track layout design (Rambo, and Transformers) featured color printed imagery on the flat surface. The Rambo set, cataloged only in 1986 by TYCO, was a near clone of the G.I. Joe set contents.