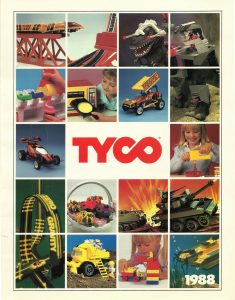 You’ll find the first appearance for this offering in TYCO’s 1988 catalog. This was a time of great expansion for TYCO’s line of product, but not for its original core… HO-scale electric trains. The HO train releases occupy a dozen pages in 1988’s annual catalog, which includes more than 100 pages.

Among 1988’s new items, the “USA Express” train set (7420) presented an under & under track plan with 33-piece Bridge and Trestle set included. Other features of this train set were an Auto Unloading Station (the piggyback terminal base with sign) and TYCO’s Operating Pipe Loader accessory introduced in the early 1980s. The owner also received the 24-piece Signs and Telephone Poles accessory and rolling stock in this set included TYCO’s AutoLoader with six vehicles. The catalog shows the 1980s compact vehicles in the train set consist, while reverting to the AMX Javelin and Chevy Camaro autos for the inset view of the Auto Unloading Station. By this time, it is thought all “USA Express” set likely included the autos tooled up in early 1980s. The other freight cars included a yellow Union Pacific gondola with pipe load, green Burlington Northern plug-door boxcar, silver Texaco tank car, and red with white stripe streamline cupola caboose.

This set sees the last new look for TYCO’s Alco Century 430 diesel locomotive model. Announced in 1966, this model served the HO line until nearly the end of offerings in 1993. This red, white, and blue C-430 carries the familiar 4301 road number and includes USA Express on its nose and long hood. Images included in TYCO’s catalog show no handrails present for this Century 430 and it’s thought that none were included for USA Express models. Within a year or too, a substitute Century 430 (Mehano-produced in Yugoslavia) would replace this Hong Kong-made locomotive in TYCO’s line. By the time TYCO’s “USA Express” arrives in 1988, the only Century 430s are this set’s colorful example and a Virginian model listed in separate sale offerings. 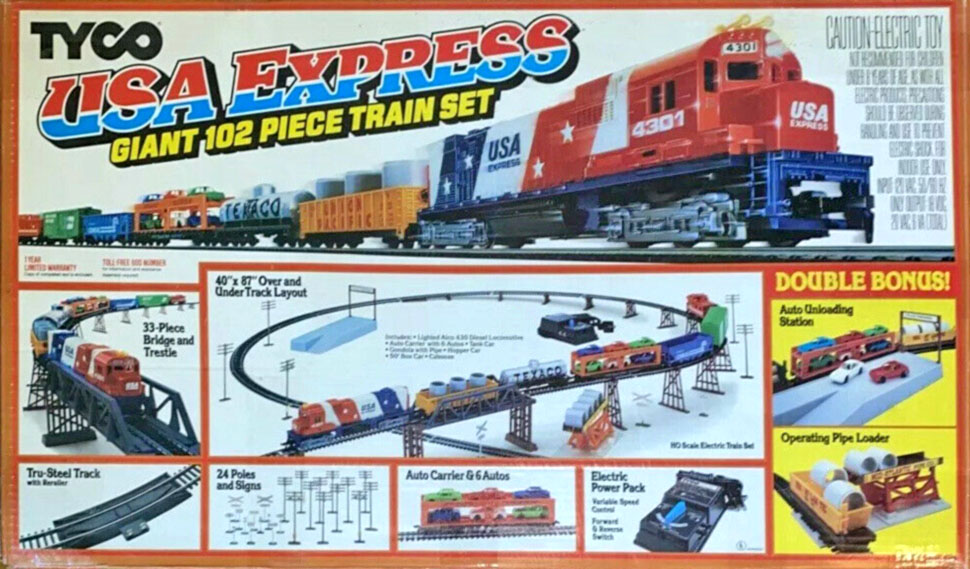 This set makes a second appearance in TYCO’s 1989 catalog with no changes. Beginning in 1990, this set is absent for the duration of TYCO’s run of HO electric trains, which concludes with 1993’s sets.

There was an interesting afterlife for this USA Express Century 430. Following TYCO’s early 1990s departure from the HO train market, International Hobby Corp. or IHC Hobby sold off inventory and/or overstock and later re-introduced some toolings. There must have been a good amount of USA Express Century 430s remaining and IHC Hobby offered them in the mid- to late 1990s. I’ve examined samples that are shrink-wrapped with the locomotive nestled in a white foam holder. There are also examples in IHC Hobby boxes.